Hey Caps Fans,
On Aug. 1, Red Rockers Victoria, Lauren and I had the awesome opportunity to participate in the Capitals’ sixth annual Baltimore Street Hockey Tournament. The atmosphere was ecstatic from the moment we arrived, with four different competition rinks. Children were scattered around the venue,  representing their respective teams by the color of their shirts. For many this was their first year competing, which seemed to add to their joy and excitement for the game of hockey. These children had practiced in their respective community centers all summer long to battle it out for the championship trophy. 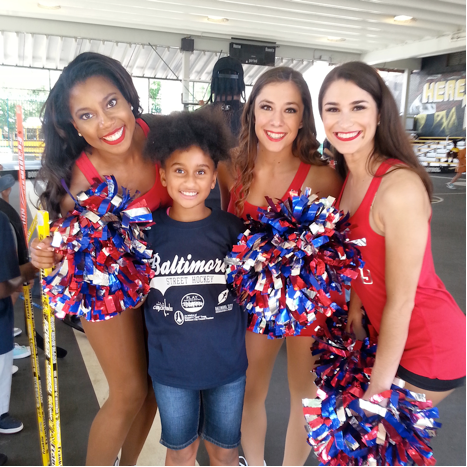 I had the pleasure of meeting a young competitor who shares the same name as me. This had been Mia’s first year playing street hockey. Mia said she loved being around her friends playing the sport and seeing them all come together as a team after all of their hard work. Her center made it to the final championship against the 2- time winning Carroll Cook Summer Center. Although they did not come away with the win, Mia was proud of her team for getting as far as they did.

Over several hours the Red Rockers, Slapshot and I were able to meet many children, who had the biggest smiles to share. They cheered with our pom poms and taught us new dance moves. Attending the street hockey tournament was by far one of my favorite experiences as a Red Rocker because I was able to go into a community and see how a love of hockey can begin. On our way out we were stampeded with hugs and hopes to see us again. I truly hope to see some of the youth at the Capitals games this year to help us ROCK THE RED!

Red Rockers Terri and Michelle teamed up to participate in the Try Blind Hockey Skating Event at Kettler Capitals Iceplex.

Hear about Victoria and Courtney's day at the children's wing of MedStar Georgetown University Hospital.